Palm oil is one of the most widespread ingredients on the supermarket shelves today, but it’s also a highly contentious one.

This vegetable oil has become almost synonymous with images of environmental devastation, but is there a realistic alternative?

Eco-conscious consumers are turning to less controversial alternatives, but according to some reports, the best solution may actually be to encourage the palm oil industry in its journey toward becoming more environmentally conscious.

Let’s take a look at what palm oil is, why it’s such a controversial product and whether sustainable alternatives really exist.

What is palm oil?

Palm oil is an ingredient found in about half of the foods that you can find in the supermarket nowadays, as well as other household products such as soap, makeup, shampoo and cleaning products.

It has been used as an industrial lubricant, in biofuels for cars and the Bank of England even considered using it in the new £20 note.

Oil palm trees can be harvested all year round and give higher yields of oil than most crops, making it an extremely popular option for manufacturers in a range of industries. It is also a highly versatile oil with applications in a huge range of areas.

It is an edible vegetable oil extracted from two species of palm tree originally native to Africa. In the 19th century, the trees were introduced to South-East Asia.

Indonesia and Malaysia are the world’s two largest palm oil growers and exporters today, but there are concerns over how the crop is affecting their natural landscapes.

Why is palm oil so controversial? 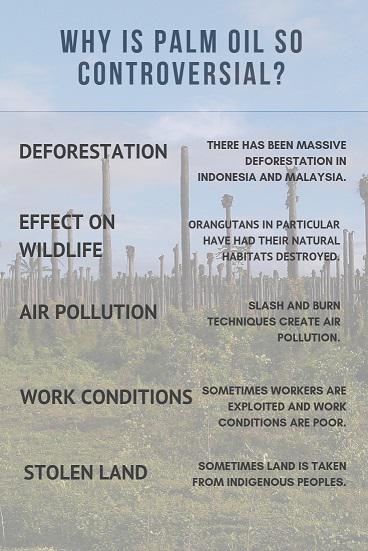 While palm oil has been in use for a long time among African and Asian populations, only recently has it become a major concern for environmental groups.

Since the 1960s, mass food production and other industries have increasingly turned to palm oil because its high yields make it a cheap and economically efficient crop. However, this boom in industry has come with real environmental and social costs.

The main problem when it comes to palm oil is deforestation.

As palm oil demand grows ever larger, space must be made for plantations, and this is often achieved by burning or logging natural rainforests to create farmlands.

Indonesia is losing its forests at a higher rate than anywhere else in the world; according to Palm Oil Investigations, Indonesia had an average natural forest loss of 917,000 hectares per year between 2009 and 2013, more than half of which was due to illegal land clearing.

Although some palm oil plantations have been placed over previously used farm land, The United Nations Food and Agriculture Organization suggests that from 1990 to 2005, 55%–59% of oil palm expansion in Malaysia, and at least 56% in Indonesia, destroyed old growth forests.

This has had a devastating effect on wildlife species that are losing their habitats, posing a serious risk to biodiversity, especially since palm oil is largely grown in the species-rich tropics.

The orangutan in the most iconic face of the palm oil crisis, and has been pronounced critically endangered as a result of massive population loss as they lose their habitats and starve to death, or are killed as pests by plantation companies.

It’s estimated that 100,000 orangutans were lost between 1999 and 2015, with 50% of the Bornean orangutan population affected by extraction of natural resources.

The Sumatran tiger, elephants, rhinos, birds and butterflies are also suffering under the effects of habitat destruction and killings associated with the industry.

There are also pollution concerns related to the slash and burn techniques used to get clear land as quickly as possible.

In 2013, Singapore – situated at the tip of the Malaysian peninsula – was subject to thick smog that smelled of burned wood and was caused by illegal forest fires on Sumatra.

The air pollution from forest burning can cause health risks, ranging from minor (eye irritation) to severe, including increased risk of cancer, respiratory and cardiovascular illness.

While U.K. residents may not be personally subject to those health risks from fires in South-East Asia, air pollution that continues at such high rates will surely affect the Earth’s atmosphere as a whole, as time progresses.

Some small farmers and labourers have benefitted economically, with a higher standard of living and improved infrastructure working oil palm as a cash crop; according to the WWF, 45% of the Indonesian palm oil industry is made up of smallholders who have relied on the industry to lift them out of poverty.

On the other hand, other social consequences of the industry are concerning.

Workers and children have been exploited and subject to forced labour, unsafe working conditions and unreasonable demands, says Amnesty International.

There have also been documented occasions when land was taken from indigenous peoples to farm oil palm without adequate compensation or permission, and other instances where locals have been harassed by the industry over land disputes.

Are alternatives to palm oil even worse?

Before deciding to take drastic action and becoming an anti-palm oil activist, it’s important to stop to think about why the crop has become such a major industry in the first place, and what the alternatives might be.

A June report by the International Union for the Conservation of Nature (IUCN) Oil Palm Task Force has complicated the problem by suggesting that replacing it with alternative crops may actually create more environmental damage than palm oil already does.

One reason oil palm become such a juggernaut was its efficiency.

The “Oil Palm and Biodiversity” report makes the point that oil palm gives very high yields compared to other common oil crops, such as rapeseed, sunflower and so on, which can require up to nine times as much land to gain a similar quantity of oil.

Currently, oil palm contributes 35% of the world’s vegetable oil demand, using only 10% of the land used to grow oil crops.

“But if it is replaced by much larger areas of rapeseed, soy or sunflower fields, different natural ecosystems and species may suffer. To put a stop to the destruction, we must work towards deforestation-free palm oil, and make sure all attempts to limit palm oil use are informed by a solid scientific understanding of the consequences.”

“When you consider the disastrous impacts of palm oil on biodiversity from a global perspective, there are no simple solutions,” said IUCN Director General Inger Andersen.

“Half of the world’s population uses palm oil in food, and if we ban or boycott it, other, more land-hungry oils will likely take its place. Palm oil is here to stay, and we urgently need concerted action to make palm oil production more sustainable, ensuring that all parties – governments, producers and the supply chain – honour their sustainability commitments.”

According to the report, outlawing palm oil could just displace the biodiversity loss already inflicted, as the expansion of replacement crops would simply take place elsewhere across the globe.

Banning the use of palm oil could also have diplomatic and economic implications, as discovered when Malaysia threatened retaliation over an E.U. plan to ban palm oil in biofuels.

Additionally, there are claims that oil palm requires fewer pesticides and chemical fertilizers than other crops – although chemical usage has had some negative effects in the industry.

Can palm oil be sustainable?

This Christmas, frozen food chain Iceland planned to run a cartoon TV advertisement about the devastating effect that palm oil farming has had on the orangutan, which can only be found wild in the forests of Sumatra and Borneo, but the ad was banned on the grounds that it was too political.

The supermarket’s managing director Richard Walker has said that he doesn’t believe that a sustainable palm oil exists on the mass market, as has moved to remove palm oil from the company’s range.

Of course, small-scale, traditional palm oil producers have extracted and sold their product for centuries without deleterious effects, but the huge industry of mass oil production is another matter.

If you are used to reading the fine print on product packaging, you may have seen labels for “sustainable palm oil,” but what does that really mean?

The Roundtable on Sustainable Palm Oil (RSPO) was established in 2004 with the aim of creating a more environmentally sound alternative, without sacrificing the livelihoods of industry workers.

Approximately 20 percent of palm oil is now certified through the Roundtable on Sustainable Palm Oil (RSPO) although there have been serious credibility questions levelled at the organization.

The RSPO certification allows for some deforestation, and some have claimed that it allows the industry to continue its destructive methods under cover of so-called sustainable certification.

In July, Greenpeace published a report alleging that the organization lacks transparency and that some of its members have been refusing to divulge their palm oil suppliers.

Another report by the Environmental Investigation Agency revealed a series of problems, including lack of organizational oversight, substandard assessments, conflicts of interest, and incompetent or negligent audit practices.

Research recently published in Environmental Research Letters found that, “No significant difference was found between certified and non-certified plantations for any of the sustainability metrics investigated… to achieve intended outcomes, RSPO principles and criteria are in need of substantial improvement and rigorous enforcement.”

The scientists particularly looked at orangutan decline in certified sustainable regions and found no improvement over standard industry practices, due to vague criteria and minimal punishment for rulebreakers.

The International Labor Right Forum has also reported that the RSPO has done little to enforce working standards, with human rights and labor violations present even at certified plantations.

According to the IUCN, “Certified palm oil has so far proven to be only marginally better in terms of preventing deforestation than its non-certified equivalent, but the approach is relatively new and holds potential for improving sustainability.”

So, with all this disappointing information, was Iceland right to ban palm oil storewide? Two academics at the University of Kent back up the IUCN in their assessment that outright banning palm oil may be counterproductive.

Dr Jake Bicknell and Dr Matthew Struebig, from the Durrell Institute of Conservation and Biology at the university, and who are working with sustainable palm oil certification bodies, have suggested that, “Iceland’s move to ban palm oil products, rather than work with the industry to seek sustainably sourced solutions, could be viewed as a step backwards. Environmentally conscious consumers should demand palm oil from certified sources, but avoiding it altogether runs the risk of putting pressure on other crops that are equally to blame for the world’s environmental problems.”

“Compared to other sources of vegetable oil (e.g. rapeseed and soybean oil) palm oil yields up to five times the oil per unit of land, and requires far less pesticide and fertiliser. This means, in order to feed the world, palm oil is actually part of the solution, because fewer resources are required.”

Some of their suggestions include:

Palm oil isn’t going anywhere. If anything, the industry is still growing; it is expected to more than double its value to £70 billion by 2020. Despite this, major traders and producers are feeling the pressure to move toward sustainability thanks to customer scrutiny.

But industry change takes time, and it can be frustrating to face a problem with no immediate progress coming.

Buying RSPO-certified products instead of uncertified ones sends a message to the industry, despite the flaws in the system.

But much of the demand for palm oil and other vegetable oils stems from their use in processed foods, and you can do your bit to reduce the market for palm oil expansion simply by choosing not to buy those products, most of which are unhealthy in the first place.

Buying whole, fresh ingredients and cooking your own meals is an easy first step toward reducing your consumption of vegetable oil, including palm oil.