Have you ever read the ingredients list on the back of a shampoo or shower gel bottle and thought to yourself, “What on earth is THAT?”

It often feels like you need a science degree to work out what is lurking inside those cosmetics bottles (or even to pronounce the ingredients).

Now, if you’re trying to switch to natural, organic, vegan or zero-waste products, you may have come across one particular ingredient called lauryl betaine.

Doesn’t sound very natural or healthy, does it? It sounds just like all those other chemicals you’re trying so hard to avoid.

So, what’s the truth? What exactly is lauryl betaine? Is it natural or is it better off avoided?

What is lauryl betaine?

Lauryl betaine is a clear or light-yellow liquid which is derived from vegetables. It was first discovered when it was extracted from sugar beet.

Lauryl betaine is usually used as a surface agent, or surfactant. Surfactants are compounds which are used in many personal body care products as they lower the surface tension between two liquids or between a liquid and a solid, allowing you to wash away dirt, makeup, pollution, skin oils and fats from your skin.

It’s often used as a surfactant in organic and natural cosmetics such as shampoo, shower gel and skin cleansers as it’s considered more natural and gentle than some other surfactants.

Many natural cosmetics companies add lauryl betaine to their products as an alternative to one particular surfactant called sodium lauryl sulphate (SLS).

Sodium lauryl sulphate has quite a bad reputation with consumers as it can dry out skin, damage hair and worsen eczema. Additionally, there are claims that it can also trigger health problems (although these are as yet unconfirmed by the science world).

Unlike SLS, lauryl betaine is considered to be much safer, gentler, and can actually help nourish the skin and hair instead of stripping away the goodness. 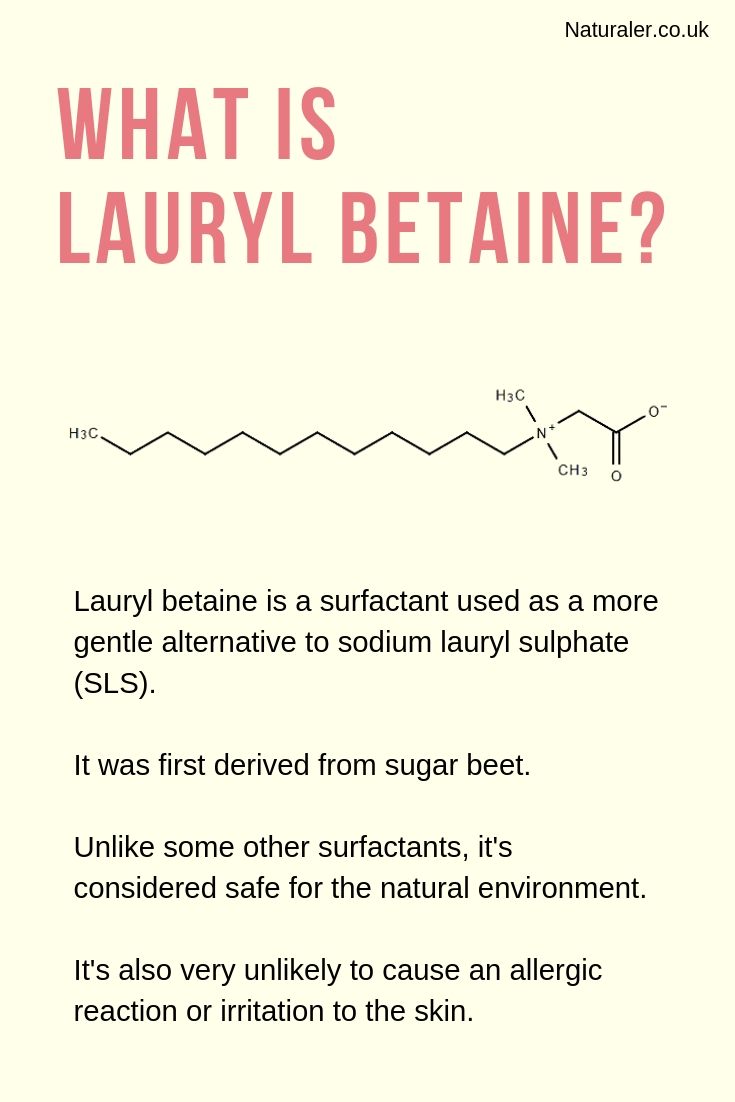 The Environmental Working Group give lauryl betaine the lowest possible score of 1 for ‘Overall Hazard’. According to their website, it’s “not expected to be potentially toxic or harmful” to human health and is also “not suspected to be an environmental toxin”.

That means it should be perfectly safe both for you and for the environment.

Can you be allergic to lauryl betaine?

Lauryl betaine is not thought to cause allergic reactions.

If you have an allergic reaction to a product containing lauryl betaine, it’s likely one of the other ingredients is to blame.

However, data on lauryl betaine is quite limited.

It all depends on how you define the word ‘natural’.

‘Natural’ is often used as a marketing term and doesn’t have an official definition when referring to chemicals or cosmetics.

However, most people would say that ‘natural’ means that it comes from something that already exists in nature. Manmade (synthetic) chemicals wouldn’t fit within this definition.

So, although it’s true to say that lauryl betaine was indeed first extracted from sugar beet, these days it usually comes from a synthetic source. If you’re using this as a defining criterium, lauryl betaine wouldn’t be considered natural.

However, that certainly doesn’t mean that lauryl betaine is a bad ingredient or one to be avoided. It remains a much safer and gentler alternative to sodium lauryl sulphate which doesn’t appear to have the same harmful effect on the body.

Just bear this in mind next time you read the ingredients list on the bottle of your shampoo, shower gel or cleanser.

Coco betaine is a natural surfactant derived from coconut. It’s often confused with cocamidopropyl betaine, but they are not the same thing.

Coco betaine is quite similar to lauryl betaine in that both are zwitterions or inner salts, both can be derived from plants and both are considered harmless.

Like lauryl betaine, coco betaine has the lowest possible score of 1 for ‘Overall Hazard’ on the Environmental Working Group’s website, which says that it’s “not expected to be potentially toxic or harmful”.

To summarise, lauryl betaine and coco betaine are both milder surfactants than sodium lauryl sulphate or cocamidopropyl betaine. They’re also both better for the environment.

Another similar surfactant is lauryl glucoside, which is derived naturally from glucose and is considered safe for both humans and the environment.

If you’re looking for products free from sodium lauryl sulphate, see these articles:

Charlotte Witts is a writer and entrepreneur who wants to show you how easy it is to live a more conscious, zero-waste lifestyle. A confirmed yoga-addict, trail runner and ocean-lover, she currently lives in the Azores where she enjoys the simple pleasures in life.