Cows are a common sight grazing in the UK countryside, so you might assume that all milk in the UK is grass-fed.

However, this isn’t the case as most dairy cows spend a large part of the year inside.

Traditionally, cows have been kept inside during the winter from November to March and then allowed to graze for the rest of the year.

Recently though, there has been a trend away from small-scale dairies to large, more intensive dairy farms which typically keep cows inside for longer periods of time.

This means that cows are fed a different diet, which can impact their health and also affects the quality of the milk they produce.

The Free Range Dairy Pasture Promise logo is something you can look for when shopping for grass-fed milk. This logo means that the milk is from cows that spend at least 180 days of the year outside.

The Pasture for Life logo, which means that the cows have been completely grass-fed for their whole life.

Supermarkets That Sell Grass-Fed Milk in the UK

Farms That Sell Grass-Fed Milk in the UK

If you live near a dairy farm, you may be able to buy organic grass-fed and even raw milk direct from the farm. You can even order online from quite a few farms: 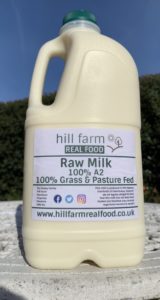 Hill Farm sells 100% A2 milk (which is easily digestible) produced by 100% grass-fed cows.

The unique thing about Hill Farm’s raw milk is they carefully select cows that only produce A2 milk. This means that their cows carry the A2A2 gene.

They feed their cows a range of grass types, which is supplemented by naturally occurring herbs, legumes, and tree browse.

They deliver nationwide, have free local Delivery available in parts of Cheshire and you may also pick up your order from the farm. 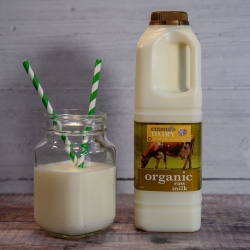 The 500-year-old farm has Old English Dairy Shorthorns, which were born and reared on the same land.

The cows are free to roam the herb and species-rich pastures in the summer months.

The probiotic raw milk is unhomogenised with naturally high levels of omega 3 fatty acids. Gazegill offers free delivery if you shop above £40. 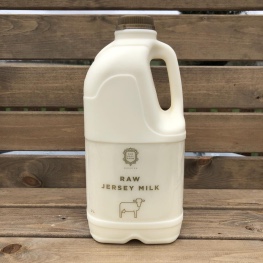 Old Hall Farm sells raw grass-fed milk from Jersey cows. Instead of separating the cow and calf, they let the calves be with the cows for 6-8 months or more.

They have a farm shop where they sell quite a few products apart from milk including milkshakes, cream, and butter.

Although they mainly sell at their shop, they also participate at regular markets and have begun to sell online.

Pipers believes that grass-fed meat and milk are good for our health and better for the environment.

Although their website does not mention how many days a year the cows are left to graze in the outdoors, they do claim that the cows are 100% grass-fed on their fields in Devon. Moreover, all the cows rear their own calves.

Their Jersey cows produce A2 milk proteins (85% of the milk is A2 protein) which is said to be easily digestible.

Each customer can order only up to six 1 litre bottles. Free UK mainland delivery is offered if you shop above £100.

How Many Dairy Cows in the UK Are Grass-Fed?

Most dairy cows in the UK graze outside for at least part of the day from April to October and spend the rest of the time inside.

However, some spend little or no time outside, something which is known as a “zero-grazing system”.

A European Commission report titled Welfare of Cattle on Dairy Farms states that in the UK, the dairy grazing situation is as follows:

“Around 30% of dairy farms maintain a traditional grazing system of winter housing and grazing from spring through to autumn.  A further 55% of farms, in addition to grazing during the summer months provide some feeding indoors during part of the day during the grazing season.”

The report doesn’t state how the remaining 15% of farms operate, but it’s likely that cows on these farms spend even more time inside.

There is lots of evidence that grass-fed milk is healthier than milk from cows raised on other feed.

Allowing cows to graze outdoors during the spring and summer is generally considered to be good for their health.

Being kept inside is typically less sanitary than being outside and can lead to lameness and mastitis (an udder infection).

Compassion in World Farming has some worrying information about the effects of keeping cows inside on their welfare here.

On the other hand, some research has shown that, just like humans, cows like to spend a decent amount of time indoors.

A study on high-yielding dairy cows by Harper Adams University College and Reaseheath College showed that, when given a choice between being indoors or outside, “the cows spent 91.9 percent of their time indoors and time spent indoors was influenced by environmental conditions” (source).

However, the study only looked at 24 cows, so its findings are not very convincing on their own.