Raw honey is simply honey that hasn’t been pasteurised, heated significantly above 35°C or processed.

It’s just pure honey the way nature intended it to be.

This helps improve its shelf life, but also kills the beneficial yeast and enzymes found in raw honey.

The temperature of a beehive is about 35°C, and many ‘raw’ honeys are heated slightly to about 38°C, but this isn’t enough to kill the beneficial enzymes in the honey.

Below we have reviewed some of the best raw honey available in the UK.

Best Raw Honey in the UK

Black Bee honey is about as close as you can get to buying local honey while still having the convenience of being able to order it online.

Unlike most honeys on the market, this product is made exclusively from honey produced in the UK.

It also comes in a recyclable glass jar, so it’s environmentally friendly.

This honey comes from bees that feed on a range of wildflowers in Exmoor and the Cotswolds.

In addition to the Summer Honey variety, the company also sells a range of other British honeys including a variety produced in London.

Black Bee Summer Honey is unpasteurised, unblended and coarse filtered, so it retains all the benefits of raw honey.

Black Bee Honey is a relatively new company founded by Chris Barnes & Paul Webb, who raised over £100,000 in crowdfunding to help launch the brand.

Most people agree that this honey tastes great, though it’s quite different to supermarket-bought honey so it may take some getting used to.

At the time of writing, Baltic Honey Shop’s Pure Raw Honey is one of the most popular raw honeys on the market in the UK.

This honey comes from Lithuania and is unpasteurised and unfiltered, with no added ingredients.

Baltic Honey Shop’s honey is crystallised, but you can soften it so it’s spreadable.

It comes in a recyclable glass jar, which is good if you’re looking to go plastic free.

You can buy Baltic Honey Shop honey in a range of varieties based on what the bees were feeding on. These include ‘Forest Field’, ‘Blueberry’ and ‘Linden’.

Most people love the taste of this honey, though this is of course subjective. Some people find that it has a strong and unpleasant smell.

Local Honey Man is a London-based ethical honey brand run by Curtis Thompson, who swapped a job in investment banking to pursue his passion for beekeeping.

This honey is produced by bees from several hives in London and Essex, which feed on pollen from a range of plants including daffodils, blackberries, lavender, pear and clover. It’s cold extracted and coarse filtered.

While London may not sound like an ideal place to produce honey, the capital actually provides bees with a large range of plants to feed from due to the number of parks and gardens.

In addition to plain raw honey, Local Honey Man also sells a range of honeys infused with natural flavourings such as lemon zest and cinnamon.

If you want to have this honey delivered regularly, you can sign up for a subscription package, which would make a great gift for a honey lover.

Most people who try this honey find it to have a richer and more satisfying taste than supermarket-bought honey.

This New Zealand-made manuka honey is raw and unpasteurised. It’s only heated to 36°C, so its unique nutritional properties are preserved.

It’s a bit pricey, but unlike some other brands, you know you’re getting genuine raw manuka honey.

This honey has a Unique Manuka Factor (UMF) of 15+. The UMF rating measures the levels of leptosperin, methylglyoxal, DHA and HMF in the honey. Honey with a UMF of 15+ has at least 514 mg of methylglyoxal per kg of honey.

Some studies have found that manuka honey can slow the rate at which bacteria multiply and help with wound healing. For these reasons, a lot of people use manuka to help them get over coughs, colds and infections.

One downside to buying this honey is that it isn’t the most environmentally friendly option since it’s imported from New Zealand and comes in a plastic (though BPA-free) jar.

Like most manuka honeys, this product is quite expensive when compared to regular honey.

This pure honey from Wellnesstore.uk comes from the pristine Bieszczady Mountains in Southern Poland.

It’s 100% raw and unpasteurised, with no added ingredients.

Like most raw honeys, this product arrives crystallised, but you can make it runny again just by warming it up a bit.

This honey comes in a large 1.25 kg jar, so it should last a while. It has a great flavour and tastes like honey is supposed to.

This raw honey comes from beehives in Moldova and Ukraine. It’s sold in a large 1.5 kg jar that offers good value for money and should keep you going for a while!

This polyfloral honey is filtered, unpasteurised and doesn’t contain any artificial flavours or added sugars and preservatives. It’s runny at first but will set over time. Once it has set, you can make it runny again by heating it up.

It comes in a BPA-free plastic jar which means it’s less likely to leak or break during shipping. The packaging is very attractive and the plastic jar is lighter than a glass jar would be, though less environmentally friendly.

This raw honey from Na’vi Organics comes from hives in rural mountainous areas in Romania. It’s unprocessed, retaining as many natural antioxidants and live enzymes as possible.

Most people agree this honey tastes delicious and has a much richer taste than supermarket-bought honey. It may arrive set, but should become soft again when left at room temperature.

Na’vi Organics is an organic superfood and supplement brand based in Acharacle in the Scottish Highlands.

Here are some of the top health benefits of raw honey: 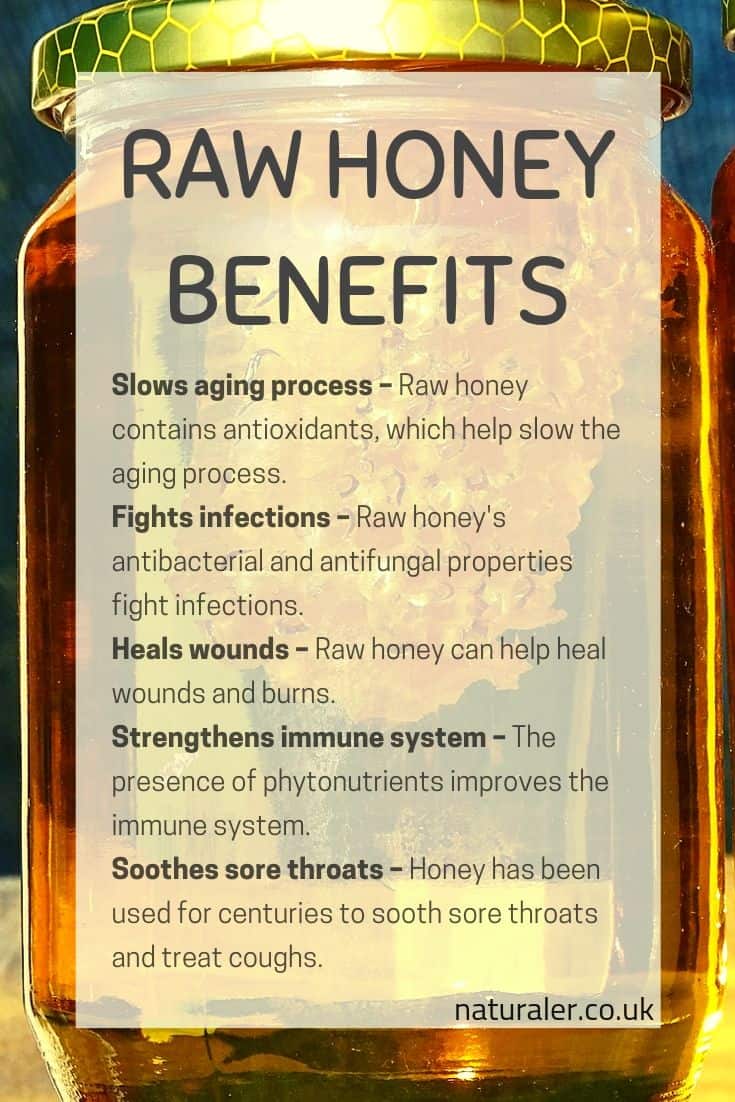 As well as just eating it, there are hundreds of ways to use raw honey.

Some of the most popular uses are listed below:

In some home remedies, raw honey is combined with other ingredients such as garlic, lemon juice, cinnamon, apple cider vinegar or turmeric.

Here are the answers to some frequently asked questions about raw honey.

What is raw honey?

There isn’t a universally agreed upon definition for “raw honey”. Most people agree that raw honey is honey that:

It is extracted from the hive and put in jars without any special treatment or processing. Almost all honey from small-scale honey producers and farmer’s markets is ‘raw’.

Why isn’t honey labelled as ‘raw’ in the UK?

Food labelling regulations in the UK no longer allow honey producers to label their honey as ‘raw’. This is because legislators believe that adding the word ‘raw’ implies that this honey has special qualities, which isn’t necessarily the case.

Is supermarket honey fake in the UK?

A lot of websites talk about how the majority of supermarket honey is ‘fake’. This is a real problem in the US, but not in the UK where honey standards are much stricter.

With the exception of honey labelled as ‘Filtered’, you’re not allowed to label as a product as ‘honey’ if the pollen has been removed:

“No pollen or constituent particular to honey may be removed except where this is unavoidable in the removal of foreign inorganic or organic matter.” – Source: The Honey (England) Regulations 2015

This is very different to in the US, where a 2011 study found that over 75% of supermarket honey didn’t contain pollen (source).

However, since Europe consumes more honey than it produces, a lot of honey is imported from countries such as China, which have laxer regulations.

It’s difficult to mass-test imported honey, and as a result “honey fraud” is a real problem – see this fascinating article.

Honey fraud can involve practices such as harvesting honey before it’s ready, resulting in higher yields but lower quality, watery honey. Unscrupulous producers can also remove pollen to hide the country of origin or dilute honey with syrups.

While the majority of supermarket honey is relatively high quality in the UK, buying direct from a local producer is the best way to be sure you’re getting the real thing.

Despite not being pasteurised, raw honey should be perfectly safe for most people except babies and pregnant women. However, there are a few potential risks:

Whether or not honey is vegan is a hotly contested topic in the vegan community. Some people argue that since honey is made by bees, it isn’t vegan, while others believe this stance is too strict.

See this article for an overview of the arguments for and against honey being vegan.

Is raw honey the same as organic honey?

No. Raw honey can be organic, but it doesn’t have to be and often it isn’t. When talking about honey, ‘organic’ refers means that the plants and flora the bees feed on are organic.

Usually beekeepers don’t know exactly where their bees go, so they can’t guarantee that their bees are always feeding on organic plants.

Lots of people interested in raw honey want to buy organic honey, but British beekeepers can’t actually be certified organic as they can’t guarantee that their bees only visit organically grown flowers.

Is raw honey good for your skin?

Raw honey has anti-inflammatory and anti-bacterial properties, and many people believe it helps moisturise and exfoliate the skin.

Its anti-bacterial properties could help reduce acne, while the antioxidants it contains could help slow down skin aging. This study looks at the potential applications of honey in treating skin disorders.

If consumed in high quantities, raw honey could be fattening. Honey is a very calorie-dense food and actually contains more calories per tablespoon than pure sugar (64 calories compared to 46 for sugar).

However, as long as you consume it in moderation it and consume a sensible number of calories overall each day, it won’t make you fat.

Can raw honey be runny?

Raw honey usually crystallises when stored at a low temperature, but will become liquid again when heated.

Raw honey should last for a very long time. However, it can go bad if it’s contaminated with something, contains toxic compounds or isn’t stored in an airtight container. Raw honey therefore does not need to be stored in the fridge, and it is better if it is not. It is recommended to store raw honey in a dry cupboard at room temperature.

Why is raw honey more expensive?

There are a few reasons why raw honey is usually more expensive than regular honey:

If we had to pick just one of these honeys to recommend it would be Black Bee Summer Honey as it’s produced in the UK, comes in a recyclable glass jar and is made by a small company who are clearly passionate about making raw, natural honey (read about their story here).

2 thoughts on “Best Raw Honey in the UK”