Sulphates (spelt sulfates in American English) are some of the most controversial ingredients found in cosmetics and cleaning products today.

Many people are familiar with Sodium Lauryl Sulphate (SLS), thanks to the controversy surrounding its safety, but SLS is just one member of a whole family of sulphates.

A range of SLS alternatives are used in conventional and natural products, from coconut derivatives to synthetic chemicals.

One such alternative is Ammonium Lauryl Sulphate (ALS), an ingredient that can be found in shampoos, cleansers, toothpastes and other products that claim to be SLS-free.

It can be difficult to interpret ingredients lists on even “natural” products and you may be wondering whether ALS is really safe or just another version of SLS.

So, let’s find out what exactly is the difference between these two substances.

While ALS and SLS achieve a similar effect in most products, there are a few key differences.

Both are anionic surfactants, but they have a different molecular structure.

SLS (Sodium Lauryl Sulphate) is a very small, simple molecule. Its small size allows it to penetrate through the upper layers of skin, travelling down into the dermis, where new skin cells are being formed.

These cells are very delicate and easily damaged by irritants, such as SLS.

While irritation caused by SLS occurs in the deeper layers of skin, it can be observed on the surface of skin as redness, itchiness and dryness.

ALS (Ammonium Lauryl Sulphate), on the other hand, is a larger and more complex molecule that is too big to penetrate the top layers of skin.

It can’t travel down into the delicate layers of newly formed cells, and therefore, it is much less irritating to the skin.

To summarise, ALS achieves similar cleansing and grease-removing results to SLS, but with less irritation to the skin. 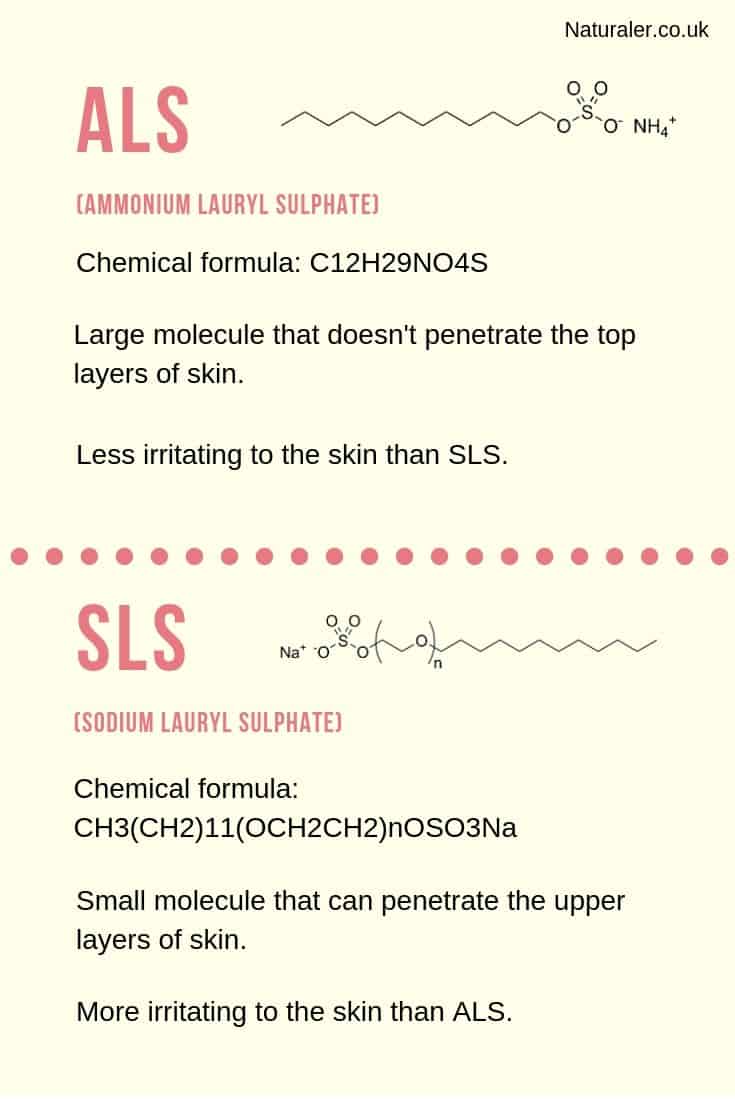 Is ALS a safe alternative to SLS?

ALS is becoming common in SLS-free products, and it is a less irritating sulphate.

However, ALS does have many properties shared by other sulphates, and it can still cause some level of dryness and irritation.

This irritation occurs on the hardier outer layers of tissue, but it can still affect sensitive skins.

Extra caution should be used around sensitive areas like the eyes and scalp, and anyone who has strong allergic reactions to SLS should approach ALS with caution.

As detergents, sulphates do remove oils and thus can strip the natural oils from your skin and hair; people with curly hair have complained of ALS containing shampoos causing excessively dry hair.

According to the Washington D.C. based Personal Care Council and Cosmetic Ingredients Review, ALS and SLS are both safe to be used in concentrations of no more than 1%, in products designed for brief use.

So, if you’re going to choose product with ALS or SLS, go for a shampoo, cleanser, scrub or anything else that will soon be rinsed off.

Although ALS is milder than SLS, it’s still best to avoid using ALS in moisturisers, makeup or anything that will be left in contact with the skin for a long period of time.

Ultimately, your tolerance to ALS depends on your own personal body chemistry.

Most people should find ALS less toxic than SLS as it simply can’t penetrate as deeply into the body, but individuals with naturally dry hair and sensitive skin may still find it too harsh for regular use.

There are plenty of ways to avoid sulphates in your beauty and grooming routines, but for anyone who doesn’t want to give up their foamy lathers, ALS is a gentler alternative to SLS.

If you have a sensitive scalp, it might be best to avoid sulphates altogether, and choose a sulphate-free shampoo.

What are ALS and SLS derived from?

SLS can be derived from either coconut oil or palm oil using something called the Ziegler process, or from petroleum oil using the OXO process.

ALS is also derived from coconut and/or palm oil, but it’s usually made in a laboratory according to BeautifulWithBrains.com.

Even when these chemicals are derived from palm oil or coconut oil they can’t really be described as ‘natural’, as they are produced using industrial processes.

ALS and SLS are both sulphates. In chemical terms, a sulphate is a salt of sulphuric acid that contains the anion SO₄²⁻ or the divalent group —OSO₂O—.

Without getting too technical, these chemicals are often used in cosmetics as surfactants, meaning that they lower the surface tension of liquids (which is useful for removing grease from hair, for example).

They work as detergents, foaming agents and emulsifiers, as well as helping products to disperse.

Mostly, ALS or SLS are used to create a lather in frothy, foamy products that leave a “squeaky clean” feeling, or creams that use a sulphate to combine oils and water-based ingredients.