71% of the Earth’s surface is covered in water.

We can’t live without the ocean: it produces more oxygen than the Amazon Rainforest and stores 50 times more carbon dioxide than our atmosphere.

The ocean is thought to be home to over 700,000 different species, up to two thirds of which have yet to be named.

The seaside is also where many of choose to spend our holidays and free time.

However, the ocean is in grave danger. Every day, thousands of tonnes of plastic waste are entering the ocean.

This waste kills marine wildlife and enters our food supply via seafood and salt.

On this page we’ve listed some of the most shocking facts and statistics about plastic in the ocean.

Before we start, here’s a quick caveat about these facts and statistics:

It’s impossible to know exactly how much plastic is in the ocean and how much enters it each year.

Similarly, the data we have on plastic contamination in marine wildlife is usually based on extrapolating the results of quite small studies across whole populations.

On this page we’ve tried to give straightforward answers to lots of the questions people have about plastic pollution in the oceans, but it’s important to say that these figures are often only estimates.

We’ve included links to the sources of each statistic so you can look into the details of each yourself.

In 2015 it was estimated that the ocean contained at least 150 million metric tonnes of plastic.[i]

Based on estimates of how much plastic is entering the ocean each year, it’s likely that the ocean contains over 180 million metric tonnes of plastic in 2019.

How much plastic enters the ocean each year?

It’s estimated that around 8 million metric tonnes of plastic enter the ocean each year.[ii]

To put this into context, this is the same weight as about 630,000 London buses.

Estimates of how much plastic enters the ocean each year vary greatly from less than 5 million tonnes to over 14 million, but the 8 million figure is the one given most frequently. 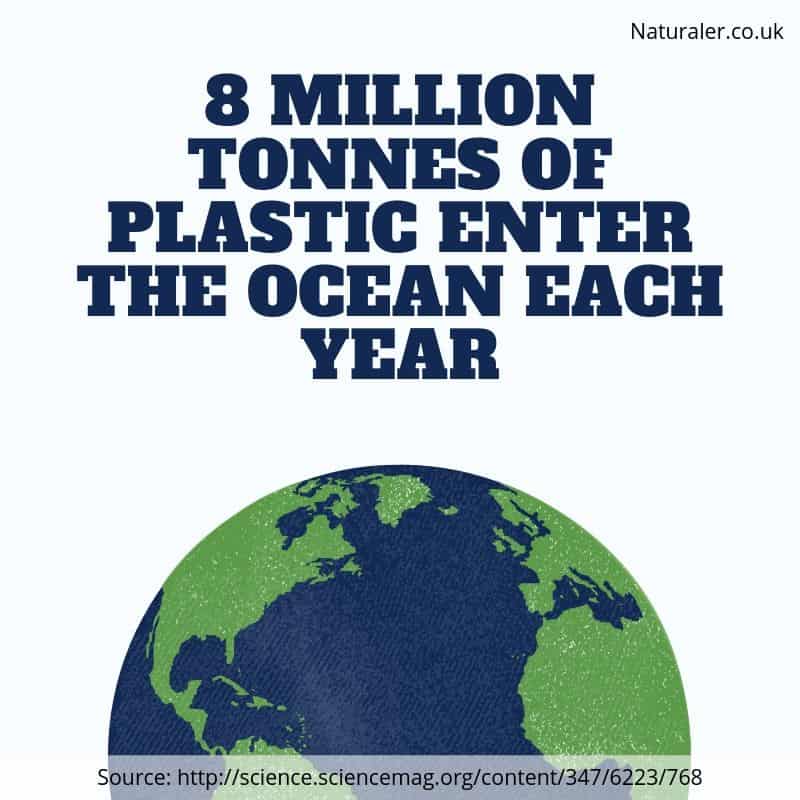 How much microplastic is in the ocean?

In 2014 it was estimated that the oceans contained 15 to 51 trillion particles of microplastics, weighing between 93 and 236 thousand metric tonnes.[iii] 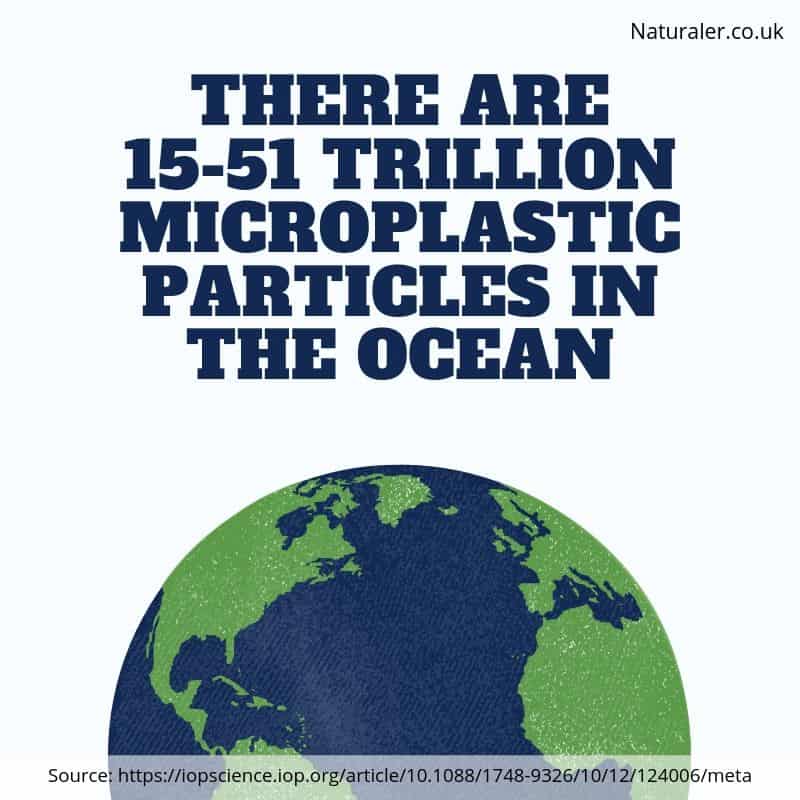 How much plastic waste is produced each year in the world?

According to the UN, around 300 million tonnes of plastic waste is produced each year globally.[iv]

What percentage of plastic gets recycled?

According to the UN, about 9% of plastic produced globally gets recycled.[v] About 12% is incinerated, so the remaining 79% ends up in landfill or the oceans.

What percentage of plastic ends up in the ocean?

This figure could be quite inaccurate, as it depends on two estimates (the amount of plastic produced and the amount that enters the ocean). Wide ranges are given for both of these figures.

How much plastic waste does the UK produce each year?

According to the UK government, the UK uses roughly 5 million metric tonnes of plastic a year.[vi]

How does plastic end up in the ocean?

The common misconception is that plastic only enters the ocean by being dumped into the ocean directly. In fact, a lot of plastic waste in the ocean ends up there accidentally.

Some ways in which plastic enters the ocean include:

Read our in-depth article on how plastic enters the ocean here.

One study found that 73% of deep-sea fish caught in the Northwest Atlantic Ocean had ingested plastic.[vii]

The exact percentage will vary depending on the type of fish and the area of the ocean in which they live.

How many fish die from ingesting plastic each year?

It would be very difficult to estimate how many fish die from ingesting plastic each year. Studies suggest that most fish ingest some plastic, but usually not enough to kill them.

What percentage of seabirds have ingested plastic?

A 2015 study estimated that 90% of seabirds ingest plastic. It’s expected that 99% of all seabird species will be ingesting plastic by 2050.[viii] 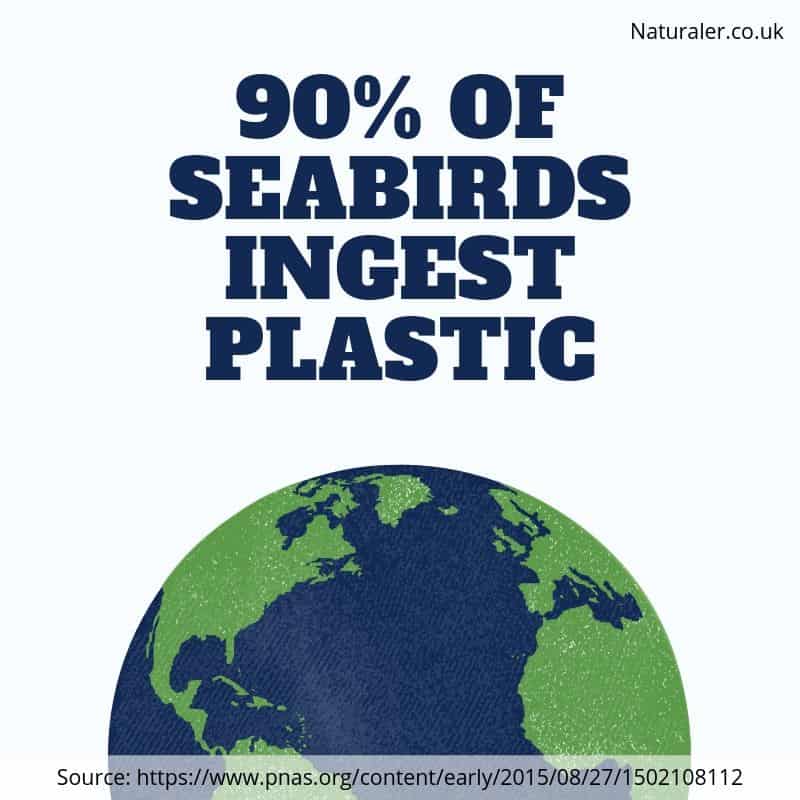 How many seabirds die from ingesting plastic each year?

Around 1 million seabirds die due to plastic pollution each year according to the UN.[ix] This includes birds that die from ingesting plastic as well as from getting tangled up in plastic.

When will there be more plastic than fish in ocean?

It’s estimated that there will be more plastic than fish in the ocean by 2050 (by weight).[x]

Which fish eat the most plastic?

In one study of deep-sea fish in the Northwest Atlantic Ocean, gonostoma denudatum (a species of bristlemouth) were found to have ingested the most plastic, with 100% of fish affected.[xi]

Microplastics have been found in about 90% of commercial sea salt brands.[xii]

One study found that 73% of deep-sea fish caught in the Northwest Atlantic Ocean had ingested plastic.[xiii] This would include cod and haddock.

However, there haven’t been many studies into how much of this plastic we actually consume when we eat fish. Plastic is concentrated in the fish’s stomach, which usually isn’t consumed by humans.

Is it safe to eat fish because of plastic?

Most studies only look at the amount of plastic in the stomach and guts of fish, which usually aren’t eaten. The question is how much of this plastic can contaminate other parts of the fish.

One study found that 80% of anchovies had microplastics in their liver, suggesting that microplastics can travel through the body.[xiv]

Plastics contain harmful chemicals such BPA and phthalates, so it’s best to limit your exposure where possible.

At the moment it’s not clear whether or not the potential dangers of eating fish contaminated with microplastics outweighs the health benefits of fish.

1 thought on “Plastic in the Ocean Facts”