In recent years, there’s been a big drive to reduce the number of plastic bags we use.

Since 2015, the law has required all large shops in England to charge 5p for single-use plastic carrier bags, and there are currently plans to increase this charge to 10p, and to include smaller shops too.

The charge has certainly had a positive effect. According to government figures, the usage of plastic bags in England’s ‘big seven’ supermarkets dropped by 86% between 2015 and 2017/18.

This is all a step in the right direction, but plastic bags are still a threat to our planet.

Over 8 million tonnes of plastic enters our oceans every year. Plastic bags are particular dangerous when they enter our rivers and seas, where they can be mistaken as food by marine animals and fish with devastating consequences.

Plastic bags also take an incredibly long time to breakdown in landfill – anything from 20 to 1000 years. As they slowly break down, they turn into tiny particles that contaminate our soil and water.

Most of us are now aware of these issues and are doing our best to reuse any plastic bags we may already have, rather than just throw them away after a single use.

But what happens when our plastic bags are no longer reusable? Plastic bags are strong and durable, but after a while they may get holes in them or the handles break.

Supermarket “bags for life” are made of heavier plastic and intended to be reused at least 14 times, but sometimes we forget to bring them to the shop and buy yet another, and many of us have a drawer at home that’s stuffed full of them!

These bags are made of heavier plastic and take even longer to decompose naturally, so it’s important that they don’t just end up in landfill.

Can Plastic Bags Be Recycled in the UK?

Yes, the majority of plastic bags are recyclable in the UK. However, they’re not always accepted by kerbside recycling schemes, so you should check before putting them in your recycling bin.

If your local kerbside recycling scheme doesn’t accept them, take them to a large supermarket to get them recycled instead.

Where to Recycle Plastic Bags in the UK

So, can you recycle unwanted and broken carrier bags in the UK?

This isn’t widespread across the UK yet but might be available in your area. According to 2018 data from the BBC, plastic bags only 18% of UK households can recycle plastic bags using kerbside recycling.

Otherwise, the easiest option is to take your unwanted carrier bags to your supermarket.

Many supermarkets now have plastic bag recycling facilities, including larger branches of the following stores:

How to Prepare Your Plastic Bags for Recycling

Once you’ve found somewhere to take your unwanted plastic carrier bags, you can take a few simple steps to make sure they’re ready for recycling.

What Are Plastic Bags Made Of?

Plastic bags are usually made out of low density polyethylene (LDPE), which is a by-product of oil. 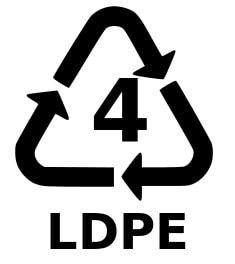 This plastic has a Resin Identification Code (RIC) of 4. This is shown by a triangle recycling symbol with the number 4 in the middle. LDPE is often referred to as plastic #4 for this reason.

LDPE can be melted down and turned into plastic sheets which are then reused by manufacturers.

Is Recycling the Answer?

Recycling makes us feel good, but it still produces pollution and isn’t a long-term solution as plastic.

Here are just a few of the problems with recycling plastic:

If we want to help the environment, we should reuse plastic bags as much as possible.

Even broken carrier bags can be reused in lots of inventive ways, for example to keep bicycle seats dry in the rain!

You could also try taking your unwanted carrier bags to local charity shops.

Plastic bags usually aren’t recycled by local authorities, but you should be able to take them to your local supermarket for recycling.

An even better choice is to stop accepting new plastic bags from supermarkets and other shops, and instead use reusable plastic-free shopping bags.

Clare began her career as a technical writer, but since having her boys has worked mostly from home writing content for various websites, including health and beauty and educational resource sites.