Aspartame can be found in any food type that is sweetened and it is often used an alternative to sugar.

One major dietary source of aspartame is sweet beverages, especially in “diet” or low-calorie alternatives that are advertised as low or no-sugar.

Some major soft drinks have eliminated the additive from their basic recipe, but still use it in their diet versions.

Even if you are familiar with one product from a particular brand, it’s always necessary to check the ingredients list for each individual product, as recipes can vary individually.

For example, Coca-cola original doesn’t use it, but Diet Coke and Coke Zero both contain aspartame; likewise, Pepsi no longer contains aspartame, but Diet Pepsi and Pepsi Max do.

It’s also worth noting that although aspartame is more commonly found in sugar-free versions, some non-diet drinks still contain it.

When researching our list of aspartame-free drinks, we found that both diet and non-diet drinks contained other artificial sweeteners like acesulfame-K, sucralose and saccharin.

While aspartame has received a particularly bad reputation, there is no guarantee that these other options are any healthier and each one may cause a different reaction from your body.

Check out this NHS webpage for more information on the various artificial sweeteners common in British supermarkets.

Without further ado, here’s our list of aspartame-free drinks available in the UK. 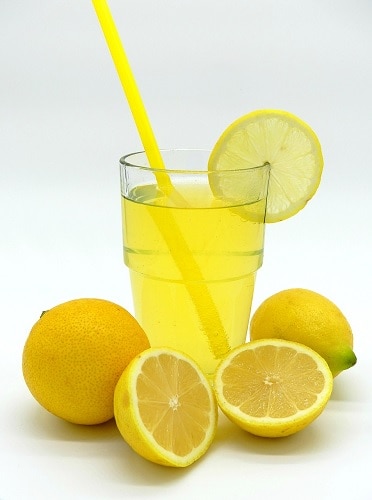 Is Aspartame Banned in the UK?

Aspartame is a low-calorie synthetic powder that is about 200 times sweeter than sugar.

While that may sound like the perfect solution to dealing with modern society’s sugar addiction, aspartame is actually a highly controversial ingredient that is reportedly found in over 6000 products worldwide.

It is added to many processed foods as an artificial sweetener and is often the main ingredient in sugar alternatives.

Aspartame has been judged safe for use by the European Food Safety Authority (EFSA) and is approved for use across the European Union “for use in drinks, desserts, sweets, dairy products, chewing gums, energy-reduced and weight control products, and as a table-top sweetener.”

When looking out for this ingredient, it can be labelled as either “aspartame” or by the number “E951.”

In 2005, one MP called on parliament to ban the substance. Liberal Democrat MP Roger Williams had had hoped to initiate an emergency action based on research into aspartame that had “truly horrified” him.

He told the House of Commons, there is “compelling and reliable evidence for this carcinogenic substance to be banned from the UK food and drinks market altogether.”

Caroline Flint, the Public Health Minister at the time, replied that aspartame was safe according to the FSA, saying that, “I am advised that aspartame does not cause cancer.” That was the last that the British government had to say on the matter.

EFSA completed its latest review and risk assessment on aspartame in 2013, where it reiterated that “aspartame and its breakdown products are safe for human consumption at current levels of exposure.

The current ADI (acceptable daily intake) is considered to be safe for the general population (including infants, children and pregnant women) and consumer exposure to aspartame is below this ADI.”

The risk assessment involved “rigorous review” of all the relevant scientific data, going back to the 1960s.

In some products, aspartame is still being used in the UK, after being removed from equivalent products overseas – Pepsi took it out of their US diet drink in 2015, but the British arm of the company has kept using the ingredient.

But according to PepsiCo, the decisions were based on consumer preferences, not the safety or health effects of aspartame.

On the other hand, some supermarkets, including Marks & Spencer and Asda, have worked to remove aspartame and other artificial food additives in their own-brand lines.

Despite the official approval of aspartame as a safe food additive, numerous petitions have come forward over the years, hoping to ban the sale of aspartame in food and drinks, but so far without success.

The most recent one closed in November 2018, though without the necessary number of signatures to get onto parliament’s radar.

So, now we have established that aspartame is widely used and officially judged to be safe in the UK, what is all the fuss about? 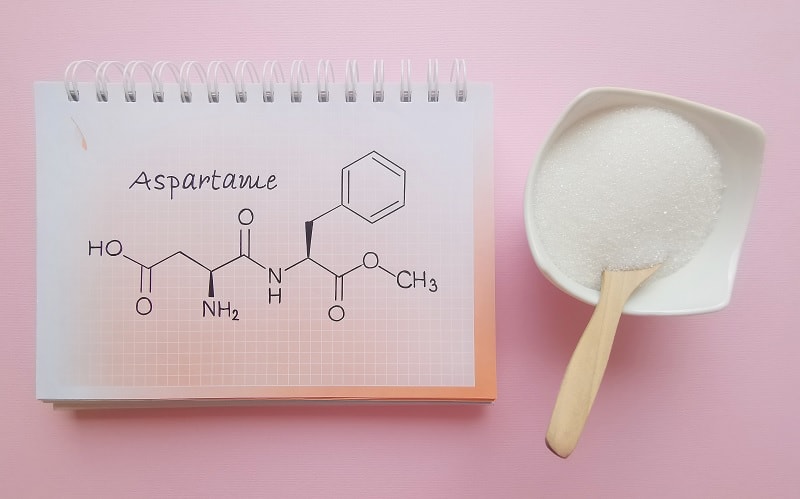 Aspartame was discovered by accident in a lab by a scientist who was trying to develop medication to treat ulcers for American drug company GD Searle.

After discovering that the chemical was far times sweeter than sugar, the company tried to find a way to sell it and found a market in the food industry, particularly in diet or “sugar-free” products that are intended to be low-calorie options.

Chemically-speaking, aspartame is made from two amino acids, phenylalanine and aspartic acid, which naturally occur in proteins that can be found in our food and the human body.

But the phenylalanine is altered slightly by adding a methyl group, which is what gives the substance its sweet flavour.

Once ingested, aspartame is broken down into its three constituent parts, which are then absorbed into the body, individually and rapidly.

While aspartic acid and phenylalanine are naturally-occurring amino acids, these synthetic forms are metabolized very quickly, unlike their natural counterparts, which causes the chemicals to spike in the bloodstream.

Much of the health concern around aspartame relates to the inclusion of the methyl group, which turns into methanol in the body.

Methanol, an alcohol-like substance, is known to be toxic to humans in high levels, but most food regulators have ruled that aspartame doesn’t contain enough of these chemicals to pose a threat to health.

In 2014, aspartame was the single greatest source of methanol in the American diet.

Aspartame has been highly contested ever since it came on the market, with apparently dodgy claims on both sides of the argument.

It can be daunting to wade through all the conflicting information to find the truth, so let’s get to some of the key points in the debate.

One group of people who definitely shouldn’t consume any aspartame are those with an inherited gene disorder called phenylketonuria (PKU).

PKU is a condition that prevents people from properly metabolising phenylalanine, one of the chemical constituents of aspartame, and found in protein-rich foods like meat and fish.

For people with PKU, consuming phenylalanine creates a build-up of the chemical within the body and, if left untreated, can result in brain damage, eczema, a musty smell in the body fluids, vomiting, tremors, epilepsy, mental health issues, and others.

PKU affects around one in 10,000 people and luckily can be detected by a simple blood allergy test during infancy.

Aspartame is required to be clearly labelled on food, drinks and medication, so PKU sufferers must always read the label on any sweetened product to make sure it doesn’t contain the substance.

How Was Aspartame Approved as Safe?

When he tried to have aspartame banned in Britain, MP Roger Williams told parliament that the background of licensing around the substance put “regulators and politicians to shame.”

Indeed, a lot of the suspicion around aspartame – as with many controversial chemicals these days – stems from ethically and scientifically questionable collusion between government regulators and powerful business interests.

This history of aspartame regulation is a long and complicated one, but there are a few key events that can describe why so many people are sceptical of the laws regarding the chemical’s safety.

Aspartame was discovered in 1965 and GD Searle proceeded to commission a range of studies on the chemical to prepare it for approval by America’s Food and Drug Administration (FDA).

In 1973, the FDA approved aspartame for limited use in dry goods. But there was a catch – one of the scientists who had researched the chemical, Dr. John Olney, claimed his experiments found that aspartic acid caused holes in the brains of infant mice.

He objected to the FDA’s approval and eventually was successful in getting the FDA to review the scientific literature surrounding aspartame.

The investigation found that GD Searle’s research was “manipulated” and full of inaccuracies; investigators reported they “had never seen anything as bad as Searle’s testing.”

These findings not only prompted action to unapprove aspartame as a food additive, but also resulted in a criminal investigation against the drug company for intentionally misrepresenting their findings.

The legal proceedings were eventually dropped to due to delay when the US attorney in charge of the investigation left… to take a job at the law firm representing GD Searle.

In 1977, Searle hired Donald Rumsfeld as CEO in the hope he could improve the company’s fortunes.

Rumsfeld allegedly said in a sales meeting that he would “call in his markers” in Washington D.C. to get aspartame approved and on the market.

What’s improper about this? Well, Rumsfeld certainly had connections in the government, given that he ended up in the administrations of US Presidents Ronald Reagan and George W. Bush.

Shortly after Reagan’s inauguration, he made various changes that would benefit GD Searle in their mission to get aspartame fully approved by FDA, including appointing commissioner Dr. Arthur Hull Hayes, Jr. Hayes had no previous experience with food additives, yet he approved aspartame for use in dry goods as one of his first acts in the position, according to the Huffington Post.

Hayes didn’t last long in the position and was forced out in 1893 after he was actually accused of accepting gifts in exchange for political favours. He left, but not before approving the use of aspartame in drinks.

He then went on to work for the PR firm that represented GD Searle and industrial food giant Monsanto, which bought GD Searle two years later.

As commented by MP Williams, “The history of aspartame’s approval is littered with examples showing that if key decision makers found against aspartame’s safety, they were discredited or replaced by industry sympathisers, who were recompensed with lucrative jobs.”

In 1993, the FDA approved aspartame for use beverages, baked goods, and confection, then in 1996 it was authorised for in all foods in the US. Aspartame was first approved for UK use in 1982 (at around the same as in the US) and gained EU-wide approval in 1994.

Whether aspartame is safe according to scientific standards may be a matter of debate, but when the regulatory process behind it is so tarnished, it’s not surprising that people are hesitant to take the government’s word that this is a safe food additive.