Many of us consider brown bread a healthier alternative to white bread. Wholemeal bread contains four times the amount of fibre, twice as much iron, and many essential B-group vitamins as its white bread counterpart.

As it turns out, different countries make bread using different processes. The flour used in white bread is often bleached for textural advantages, but some countries have banned this chemical bleaching. This leaves one crucial question: is white bread bleached in the UK?

Is the Flour in White Bread Bleached in the UK?

You’ll be pleased to hear that white bread is not bleached in the UK! The European Union banned food additives as bleaching agents in 1998. The United Kingdom still uses the same food standards legislation today.

The act is known as The Bread and Flour Regulations 1998. It bans bleaching agents such as chlorine, bromates, and peroxides.

If you have read online that white bread is bleached, you were probably reading an American website. White bread isn’t bleached in the UK.

Why Is Bleached Flour Banned in the UK?

Bleached flour is prohibited in the UK and many other parts of the world including the EU, Canada, Brazil, Argentina, and Nigeria, as the process uses harsh chemical agents.

The Foods Standard Agency’s role is to ensure food is safe for people to eat. Therefore, based on these animal studies, the United Kingdom decided to prohibit the use of these chemicals in food production processes. By proxy, this means that bleached flour is also banned. 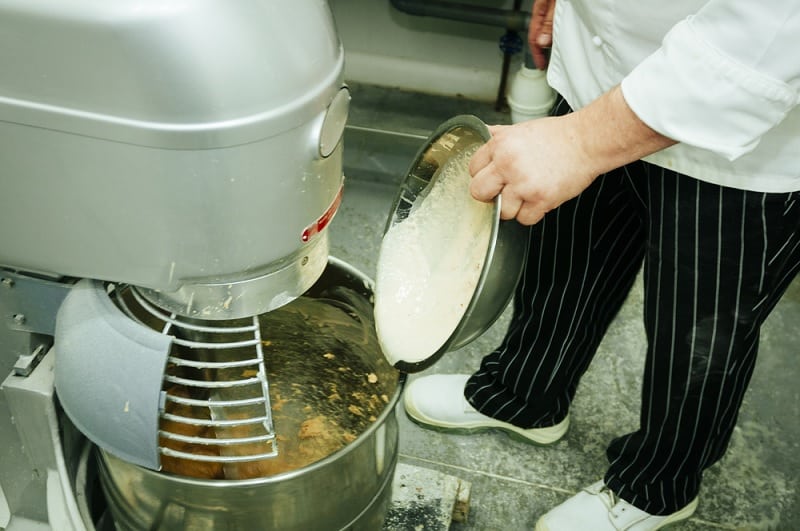 What Are the Health Risks of Flour Bleaching Agents?

Many different chemical agents are used to bleach flours. Examples include benzoyl peroxide, calcium peroxide, chlorine dioxide, nitrogen dioxide, and azodicarbonamide. Each of these chemicals affects the body differently, so the health risks of bleached bread depend on the agents used.

Take potassium bromate, for example. This chemical is a common bread-making additive found to increase the risk of kidney damage and act as a carcinogen (cancer-causing substance) in animal studies.

Similarly, benzoyl peroxide can harm the body’s antioxidant status and decrease the nutritional value of other foods.

Why Do Some Countries Bleach Flour for Bread?

Despite the health risks, not all countries have banned bleaching agents for the purpose of bread making. One prominent example is the United States.

The US still uses chemicals such as potassium bromate, azodicarbonamide, or chlorine dioxide gas to turn flour white. Benzoyl peroxide is one of the most commonly used bleaching agents, deemed “generally recognised as safe” by the FDA.

The main reason for bleaching flour is to give it a softer texture. The chemicals used in the bleaching process age the flour and make it much more fine-grained than unbleached flour.

As you might expect, bleached flour also has a whiter colour. Before chemical bleaching, flour has a natural pale yellow hue caused by the pigment xanthophyll, but the chemicals strip this pigment away. Therefore, bleaching also serves an aesthetic purpose.

How Is White Bread Made in the UK?

We’ve learnt that white bread is not bleached in the UK due to bans on chemical agents in food. But you can purchase white and brown bread from almost every UK supermarket. So, how do they make white bread without using chemicals?

White bread is made using wheat flour from which the bran (the outer protective skin) and the wheat germ (the seed from which the new plant grows) are removed.

Thankfully, this refining process is not done using chemicals; modern milling machines are used to open the wheat grains and separate the components. This means any white bread you find in your local supermarket is entirely natural.

Many wonder whether brown bread is dyed if white bread isn’t bleached. This is a more confusing question as the answer is: sometimes!

When referring to brown bread, most people are referencing the colour of the loaf. And indeed, some brown bread is made using white flour and adding dark-coloured ingredients. Examples include coffee, molasses, and caramel.

However, other brown breads are made using unrefined wheat flour. In other words, the wheat grains have not been milled, and the bran and germ remain intact.

What Type of Bread Is the Healthiest?

Ask most people, and they’ll tell you what brown bread is the healthiest. This claim is somewhat valid; bread made from wholegrain flour is more nutritious than white bread. Wholegrains are richer in protein, fibre, B vitamins, iron, and zinc. Eating wholegrain foods as part of a balanced diet reduces the risk of many diseases, including diabetes, heart disease, and stroke.

However, some brown bread is masquerading as wholemeal bread when it’s really a dyed white loaf. Breads might also contain a mix of wholewheat flour and white flour, which doesn’t carry the same nutritional profile.

The colour of the bread can be somewhat of an illusion. The healthiest bread isn’t “brown” or “white” – it’s wholegrain!

As you cannot gauge by colour, the only way to check for this is by assessing the flour details on the label. Look out for brands of bread that say “100% whole-grain” or “100% whole-wheat”, and avoid bread that doesn’t offer a percentage or uses the term “wheat flour” instead of “wholewheat flour”. Loaves that contain wheat flour rather than wholeweat flour are usually refined loaves that lack the core nutritional benefits.

Read our guide on the healthiest types of bread to learn more about choosing a healthy loaf.